Travelers of the Gray Dawn by Paul Grimshaw


To say that Tommy Fuller has a major problem is a gross understatement! His day began with a challenging, as well as frightening, situation that was not destined to rapidly improve.

Tommy, Greg Jackson and Mike Phillips are all Civil War enthusiasts,  participating in a major reenactment event. Circumstances bring them together on a journey that transports them into the actual Battle of Gettysburg and into a time where they discover that the Civil War seems to have concluded very differently than their knowledge of history represents.

Embroiled in a situation where they are ultimately living as fugitives in this very different society, they must claw and scratch their way back to their own time and lives. Can they trust anyone to help? 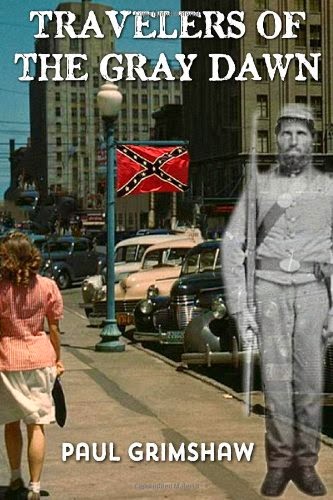 I read this book with particular interest, as I have a old friend who is an expert on Civil War history and happens to be an active reenactor. He performs a one man show in which he dresses in uniform and tells his story of being in the Civil War, describes the physical conditions, the emotional conflicts, the governmental/moral issues of the time, and is so convincing in his performance, one would believe he had really been there in that capacity. Many historical society chapters invite him to speak, and I must say that hearing him is an intriguing experience. A room in his house has been effectively converted into a museum of Civil War memorabilia, and visiting him and his home is unforgettable.

Reading Travelers of the Gray Dawn is a similar experience. It is far more than a step back in time. It takes the division of the north and south states one step further and considers what life might have been like if the outcome of the war had been significantly different. The book is a combination of time travel, history, fiction, and science fiction with a touch of romance included for good measure.

Author Paul Grimshaw educates us about various aspects of the Civil War, while painting a vivid picture of the social implications of such a horrifically divided time in our nation’s history.  Reading the book caused me to pause and ask the question, “What lessons did we learn from the Civil War?” As much as I love friends and family from both the north and the south, I am very much aware that there are still people who harbor resentment toward “those Yankee northern aggressors.”  And there are northerners who still think of the southerners as unsophisticated “Rebels.” How much progress has been achieved in erasing the division and disrespect? Will these stereotypes ever be eliminated?

On another note, this book also sheds some light on what the eager reenactors really do on those battlefields--something that always sparked my curiosity. I could definitely visualize this story as a possibility for the big screen. I hope that Paul Grimshaw will let us know when the movie will be released and if we are invited to its debut!! 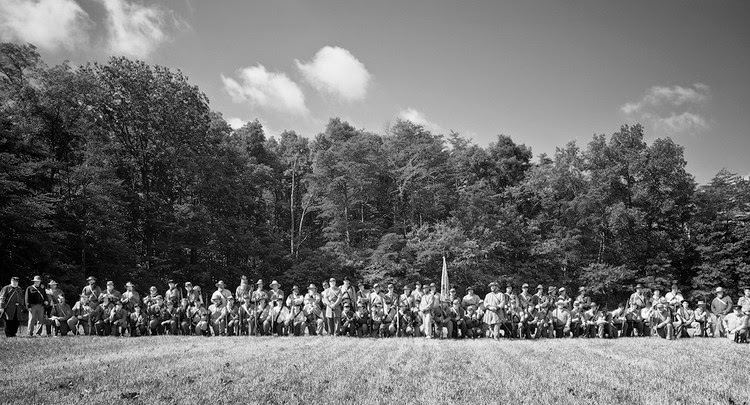 What if...? What if the South had won the American Civil War? What might the world look like in 2013 if, in 1863, the Confederated States of America won the Civil War? These issues are considered in the action-adventure time-travel thriller "Travelers of the Gray Dawn." This fast moving, movie-like story has been said to be as if "Cold Mountain" meets "Back to the Future" with a little "National Treasure" thrown in for the "fun factor." Join three modern day Civil War reenactors who begin their morning at the 150th Anniversary reenactment of The Battle of Gettysburg, and accidentally stumble through time and space finding themselves in a world that seems familiar in some ways, but is very different in others. This novel, from freelance journalist Paul Grimshaw, takes aim as part cautionary tale, part mystery, and part cops & robbers with a love story at its heart.

A Mini-Interview with Paul Grimshaw

What prompted you to write the story? “I’ve always been a big Sci-Fi fan (too much Twilight Zone as a kid) and an American history buff.  When I saw my first Civil War reenactment in Franklin, TN 25 years ago, I had this crazy notion about a fun story involving time travel and the South winning the Civil War.”

How long did it take you to complete the project? “Who knows? I worked on it in fits and starts over the past 25 years, dropping for 10 years  at one point, picking it back up, stopping for 2 or 3 years, etc. But with the approach of the Sesquicentennial (150th) of the Civil War approaching, I made a mad dash to finish in 2012, just before the 150th anniversary of the Battle of Gettysburg (2013).”

Are you currently working on Volume II? “Yes and no! I’ve decided on a prequel, and have the rough story idea mapped out in my head, but no actual words to paper (or computer screen) yet. But soon!  I should note that I have a new book deal almost wrapped up with Arcadia Publishing in Charleston. It will be a non-fiction Civil War history and photo archive project, released in 2015. Arcadia is huge – international, 9,000 titles in print, and they are the distribution partner that’s been selling my book at select Walmart stores.”

Freelance journalist / musician Paul R. Grimshaw is a lifetime amateur historian, with distant ties, like many Americans, to the U.S. Civil War. Born in Syracuse, New York, Grimshaw has traveled extensively and lived for extended periods in Nashville, TN, Central Mo, and South Carolina, where he currently resides. His debut novel, Travelers of the Gray Dawn, combines his love of sci-fi and history to answer the "What if?" questions of a modern world, in the wake of a Confederate victory. Grimshaw is an active Civil War reenactor, participating in as many 150th Anniversary reenactments as his schedule will allow. He was a part of the historic 150th Gettysburg Reenactment in July, 2013, along with 15,000 reenactors and 100,000 spectators.

Visit his Amazon page at:  http://www.amazon.com/Travelers-Gray-Dawn-Paul-Grimshaw-ebook/dp/B00DH3J8UK

Stop by, visit the author, and purchase a copy that he will graciously sign!

I will be taking a summer break from blogging on this site, but will periodically feature some particularly interesting books. Check back for updates!

Posted by Mary Anne Benedetto at 5:00 AM No comments:

Mother, I AM Your Daughter! by Diane Drummond Dupre


Anyone who knows me, knows that I am a huge advocate and instructor of memoir writing. I especially love reading stories that people have taken the time and effort to pen about their lives. It preserves history. If we don’t share our stories, they are lost to our future generations.

In Mother, I AM Your Daughter: Do You Want to See My Driver's License Again? Diane Drummond DePre tells us exactly what she thinks about life as she was growing up, getting married, having children and becoming caregiver to her mother following her dad’s passing.

She was a self-admitted “Daddy’s Girl,” and was crushed to see her dad’s gradual demise due to Alzheimer’s, a debilitating disease that robs people of their personalities, their logical behavior, their relationships and eventually their lives.

At the same time, her mother was also suffering from Alzheimer’s. Diane had her hands full as she made every effort to work out the best, most logical care for her parents.

This story delves deeply into the frustrations children can face in trying to keep elderly parents safe, comfortable and happy. Their worlds can change abruptly, and we all know how the older generation generally feels about change. They become very much accustomed to their own routines, and uprooting them--even in their best interest--can be completely unnerving to them.

Then there are family issues of determining who will be the responsible sibling for overseeing the care and affairs of an elderly parent. Dynamics vary from family to family, but the tasks often fall on one individual, and God help him/her if he/she doesn’t have a strong support system backing them up one hundred percent. As much as one loves a parent and wants everything right for them, that responsibility can begin to weigh heavily on the patience barometer when there is no or little relief or respite to the caregiver.

I give Diane tremendous credit for being completely honest and direct about her feelings and personal experience in this arena. She doesn’t try to sugar coat what transpired and paints a vivid picture of life as she lived it. Her stories elicit every emotion from laughter to sadness and most definitely sympathy.

What is it like to care for a parent and know that today will be just as unpredictable as yesterday? Exactly what will you be ejected from your comfort zone to handle next? Take a walk in Diane’s shoes for a touching dose of reality about our aging population.

Who will care for us when we can no longer care for ourselves? It is a sobering question. Bravo to Diane Drummond DuPre for sharing her account of life as a caregiver, and many prayers and blessings to her as she travels her own uncertain journey.

Mother, I Am Your Daughter: Do You Want to See My Driver's License Again? is a humorous, yet tender memoir about an aging mother with Alzheimer's Disease and her grown daughter who cares for her. Filled with southern charm, hilarious tales and abiding love, Mother I Am Your Daughter is a not-so-guilty pleasure for mothers, daughters and caregivers of every age and every stage!

In the Words of Diane Drummond DuPre

“She’s my mother, my friend, my child, my teacher, my entertainment and my full time job. I am her child, her friend, her mother, her sister, her teacher, her nurse, and whoever else she wants me to be at any given moment.” 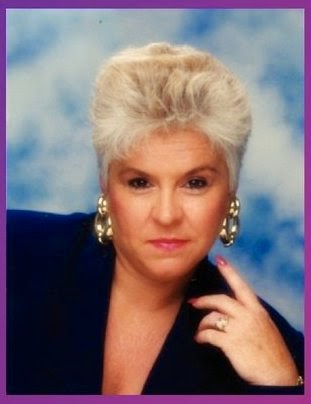 The author lives in the Myrtle Beach area with her husband, John, happily hosting her growing family of children and grandchildren.

Visit her Amazon page at:

Author of Eyelash, 7 Easy Steps to Memoir Writing: Build a Priceless Legacy One Story at a Time!, Never Say Perfect, From Italy with Love & Limoncello and Write Your Pet's Life Story in 7 Easy Steps!

Posted by Mary Anne Benedetto at 4:30 AM No comments:

Promote Your Page Too

Mary Anne Benedetto
Loving life in Murrells Inlet, SC where I can pack up my writing, a good book or my Kindle or Nook to read, my anti-gravity chair, snacks, and drive 10 minutes to the beach. Also enjoy golf, family, visitors, and helping people write their memoirs and pet stories.